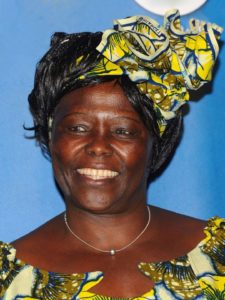 What do Trees have to do with Peace?

Forty years  prior, in the country of Kenya , 90% of the forest had been chopped down.

Without trees to hold  the topsoil in place, the land became like a desert.

When the women and girls would go in search of firewood in order to prepare the meals, they would have to  spend hours and hours looking for  what few branches remained.

So she planted a tree. And then she planted another. She wanted to plant thousands of  trees, but she realized that it would take a very long time if she was the  only one doing it.So she taught the women who were  looking for firewood to plant trees, and they were paid a small amount for each sapling they grew.

Soon she organized women all over the country to plant trees, and a movement took hold. It was called the Green  Belt Movement, and with each passing year, more and more trees covered the land.

Changes like these were threatening to some. The president of the country didn ‘ t like any of this.So police were  sent to intimidate and beat Wangari for planting trees, and for planting ideas of equality and democracy in  people ‘ s heads, especially in
women ‘ s. She was accused of “subversion” and  arrested many times.

Once, while Wangari was trying to plant trees, she was clubbed by guards hired by developers who wanted the lands cleared.  She was hospitalized with head injuries. But she survived, and it only made  her realize that she was on the right path.

For almost thirty years, she was threatened physically, and she was often made fun of in the press. But she didn ‘ t  flinch. She only had to look in the eyes of her three children, and in the  eyes of the thousands of women and girls who were blossoming right  along with the trees, and she found the strength to continue.

And that  is how it came to be that 30 million trees have been planted in Africa , one tree at a time. The landscapes–both the  external one of the land and the internal one of the people–have been transformed.

In 2002, the  people of Kenya held a democratic election,  and the president who opposed Wangari and her Green Belt Movement is no  longer in office. And Wangari is now Kenya ‘ s Assistant Minister  for the Environment.

She is 65  years old, and this year she planted one more tree in celebration and  thanksgiving for being given a  very great honor:

Wangari  Maathai has been awarded the Nobel Peace Prize. She is the first African  woman to receive this award.

After she was notified, she gave a speech  entitled, What Do Trees Have To Do With Peace?”
She pointed out how most  wars are fought over limited natural resources, such as oil, land, coal  or diamonds. She called  for an end to corporate  greed, and for leaders to build  more just societies. She  added:

“Our recent experience in Kenya gives hope to all who have  been struggling for a better  future. It shows it is possible to bring about positive change, and still  do it peacefully. All it takes is courage and perseverance, and a belief that  positive change is
possible. That is why the slogan for our campaign was ‘ It is Possible! ‘ ”

“On  behalf of all African women, I want to express my profound appreciation  for this honour, which will serve  to encourage women in Kenya , in Africa , and around the world to raise their voices and not to be  deterred.”

“When we plant trees, we plant the seeds of peace and seeds  of hope. We also secure the future for our children. I call on those around the  world to celebrate by planting a  tree wherever you are.”

As she received the Nobel Peace Prize this  week in Oslo ,  she invited us all to get involved:

“Today we are faced with a  challenge that calls for a shift  in our thinking, so that humanity stops threatening its  life-support system. We are called  to assist the Earth to heal her wounds and in the process heal our  own.”

Can we accept Wangari ‘ s invitation?

As we look  around our neighborhood  or city, as we look at our own  country, What is needed?

Seguente Theme powered by WordPress
%d bloggers like this:
We use cookies to ensure that we give you the best experience on our website. If you continue to use this site we will assume that you are happy with it.Ok